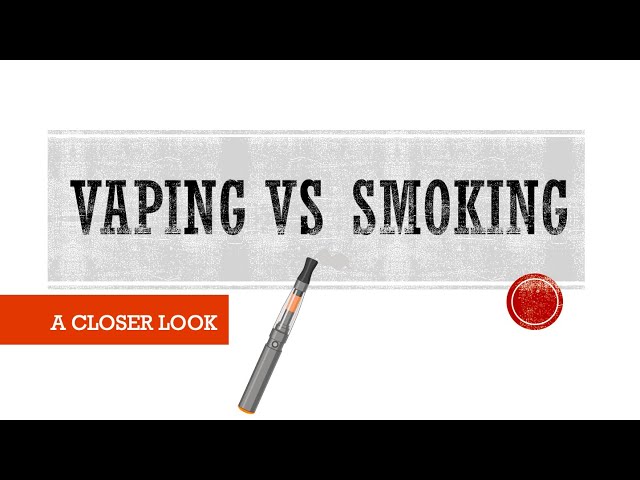 Is Vaping Healthier Than Smoking Cigarettes?

It’s a common question with a complicated answer. We break down the pros and cons of vaping vs smoking cigarettes.

It’s important to understand that there is no simple answer to this question. The truth is that the jury is still out on whether or not vaping is truly healthier than smoking cigarettes. There are pros and cons to both vaping and smoking cigarettes, and it’s ultimately up to the individual to decide which they feel is more harmful.

With that said, let’s take a closer look at some of the pros and cons of both vaping and smoking cigarettes to help you make a more informed decision.

The Risks of Vaping

Vaping may be less harmful than smoking cigarettes, but that doesn’t mean it’s safe. In fact, vaping comes with its own set of risks.

One of the biggest dangers of vaping is that it can contain high levels of nicotine. Nicotine is a highly addictive substance that can lead to tobacco dependence. It can also have harmful effects on brain development in young people.

Another risk of vaping is that it uses chemicals, such as propylene glycol and vegetable glycerin, which can be toxic when heated and inhaled. These chemicals can cause serious lung damage and other health problems.

Vaping can also increase your risk of developing cancer. The heat from vaping can damage the DNA in your cells, which can lead to cancerous changes.

In addition, some research suggests that vaping may increase your risk of having a heart attack or stroke. This is likely due to the fact that nicotine constricts blood vessels and increases heart rate, which can put a strain on the cardiovascular system.

So while vaping may be less harmful than smoking cigarettes, it’s still not a safe habit. If you’re looking to quit smoking, there are better ways to do it than by taking up vaping. Talk to your doctor about other methods that might be right for you.

The Risks of Smoking Cigarettes

Smoking cigarettes is known to cause damage to nearly every organ in your body, and it’s the leading cause of preventable death in the United States. Cigarette smoking increases your risk of:

Cancer
Cigarette smoking is responsible for more than 480,000 deaths per year in the United States, including more than 41,000 deaths from cancer.cigarette smoking causes 87 percent of lung cancer deaths. It’s also linked to cancers of the larynx, pharynx, esophagus, kidney, bladder and pancreas.

Lung disease
Smokers are 12 to 13 times more likely to die from lung cancer than nonsmokers. Cigarette smoking is also linked to other lung diseases such as chronic bronchitis and emphysema.

Heart disease
Smoking cigarettes causes high blood pressure, hardening of the arteries and a host of other problems that can lead to heart disease. Smokers are two to three times more likely to die from heart disease than nonsmokers.

The Benefits of Vaping

Vaping has become a popular way to consume nicotine, especially among people who are trying to quit smoking cigarettes. But is vaping really any healthier than smoking?

There are some potential benefits of vaping over smoking. For one, because vaping involves inhaling vapor instead of smoke, it doesn’t expose the lungs to the same harmful chemicals that smoke does. In fact, a recent study found that vaping is 95% less harmful to the lungs than smoking cigarettes.

Additionally, because vaping allows people to control how much nicotine they consume, it could potentially help smokers wean themselves off of nicotine altogether. Reducing the amount of nicotine in the body has been shown to help people quit smoking cigarettes altogether.

So while we can’t say for sure that vaping is 100% safe, it does appear to be significantly less harmful than smoking cigarettes.

The Benefits of Smoking Cigarettes

Despite the well-known risks, some people feel that the benefits of smoking cigarettes outweigh the dangers. The nicotine in cigarettes can have a relaxing effect, and smokers often say that smoking helps them concentrate. Cigarettes also provide an opportunity for socializing and can be part of a daily routine.

Related Articles >  How to Gain Weight in a Healthy Way

The jury is still out on whether vaping is healthier than smoking cigarettes, but there are some indications that it may be less harmful. If you are considering switching to vaping, be sure to do your research and talk to your doctor to make sure it is the right decision for you.