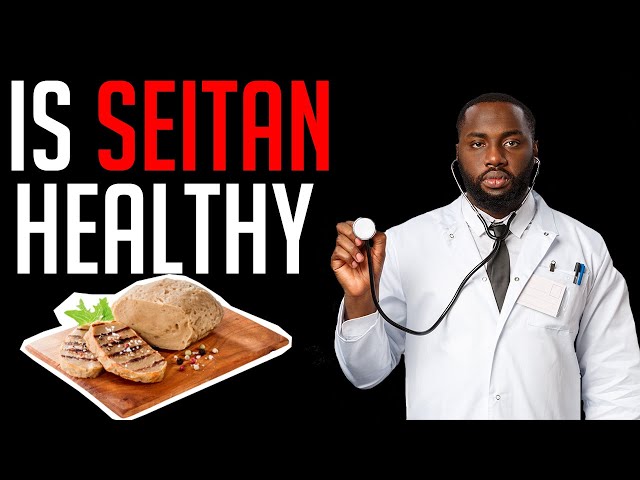 Is Seitan Healthy for You?

Seitan is a protein-rich food made from wheat gluten. It’s a popular meat substitute for vegetarians and vegans, but some people worry that it’s not healthy. This article breaks down the pros and cons of seitan to help you decide if it’s right for you.

Seitan is a protein-rich food made from wheat gluten, and it’s often used as a meat substitute in vegetarian and vegan dishes. While it’s a popular choice for those following plant-based diets, you may wonder whether it’s healthy. This article reviews seitan, its nutrition, benefits, and downsides.

Seitan is made by rinsing wheat flour dough in water until all the starch is removed, leaving only the gluten protein behind (1). It originated in China over 2,000 years ago and was traditionally used in Buddhist cuisine (2).

Today, seitan is commonly made at home or purchased pre-made at health food stores. It can be flavored with various seasonings, such as soy sauce or ginger. Seitan can be baked, grilled, fried, or steamed and added to soups, stews, stir-fries, and other dishes.

The history of seitan

Seitan has a long and storied history that dates back centuries. It was first mentioned in Chinese texts as early as the 6th century, and it’s thought to have originated in Buddhist monasteries as a meat-free alternative to pork or lamb. Seitan became popular in Japan during the Edo period (1603-1868), when Buddhist monks introduced it as a way to stretch limited food resources.

During World War II, seitan was introduced to the West by American servicemen stationed in Japan. After the war, it began appearing in natural food stores in the United States, and today it’s a staple of many vegan and vegetarian diets.

So what exactly is seitan? It’s made from wheat gluten, which is the main protein found in wheat flour. To make seitan, wheat flour is mixed with water to form a dough, and then the dough is kneaded to develop the gluten proteins. The dough is then rinsed repeatedly under running water until all of the starch has been removed, leaving behind only pure gluten. Seitan can then be steamed, baked, sautéed, or grilled like any other protein source.

Seitan is often described as “mock meat” because of its chewy texture and ability to absorb flavors well. It’s often used as a beef or pork substitute in dishes like stir-fries, curries, sandwiches, stews, and more. Seitan is also a good source of protein, iron, and calcium.

The benefits of seitan

Seitan is a popular vegan protein source that is made from wheat gluten. It is high in protein and low in fat, making it a healthy option for those looking to add more protein to their diet.

Seitan is also a good source of iron and magnesium, two minerals that are often lacking in vegan diets. Additionally, seitan is easy to digest and does not contain any cholesterol or saturated fat.

There are some potential downsides to seitan, however. Because it is made from wheat gluten, it is not suitable for those with celiac disease or gluten sensitivity. Additionally, seitan can be high in sodium due to the process of manufacturing it.

Related Articles >  Is Tapioca Healthy for You?

Overall, seitan is a healthy option for vegans and vegetarians looking for a high-protein food source. However, those with gluten sensitivities should avoid it.

The drawbacks of seitan

Though seitan is low in fat and a good source of protein, it is very high in sodium. A single serving of seitan can have up to 1,000 mg of sodium, which is more than half the recommended daily intake. Seitan is also lacking in many vitamins and minerals, so it’s important to supplement your diet with other sources of these nutrients if you regularly eat seitan.

Seitan is a common ingredient in vegan and vegetarian dishes. It is made from wheat gluten, which is the main protein in wheat. Seitan has a chewy, meat-like texture and can be flavored to taste like different meats. It is a good source of protein and is low in fat and calories.

Some people may be concerned about the safety of eating seitan because it contains gluten. However, there is no evidence that seitan is harmful for people with celiac disease or non-celiac gluten sensitivity. In fact, some studies have shown that seitan may actually be beneficial for people with these conditions.

If you are looking for a healthy meat alternative, seitan may be a good option for you. There are many delicious recipes available that use this ingredient.