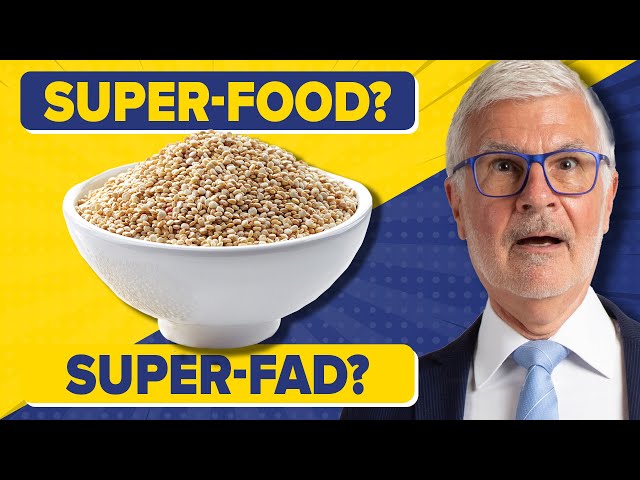 If you’re health-conscious, you’ve probably heard of quinoa. This so-called “superfood” is praised for its high protein content and various health benefits. But is quinoa really as healthy as people say? Let’s take a closer look.

Quinoa has become a bit of a buzzword in the health food world. This tiny grain-like seed is packed with nutrients and is considered a superfood by many. But is quinoa really as healthy as everyone says it is?

Here’s a look at the nutritional benefits of quinoa and what the research says about its health effects.

Quinoa is a good source of protein, fiber, and vitamins and minerals.

Quinoa is a good source of protein, providing all the essential amino acids your body needs. It’s also high in fiber and vitamins and minerals, including magnesium, phosphorus, manganese, and copper (1).

These nutrients make quinoa an excellent choice for people looking to increase their intake of whole grains. In fact, quinoa has been shown to be more nutrient-dense than other grains like rice and wheat (2).

The History of Quinoa

Quinoa is an ancient grain that was first cultivated in the Andes Mountains of South America over 5,000 years ago. The Incas, who inhabited the region at that time, considered quinoa to be sacred and referred to it as the “mother of all grains.”

For centuries, quinoa was a staple food of the indigenous people of the Andes. It was not until the 1960s that quinoa began to be exported to other countries. In the last few decades, quinoa has become increasingly popular as a healthy alternative to other grains such as rice and wheat.

There are many reasons why quinoa is considered to be a healthy food. Quinoa is a good source of protein, fiber, and vitamins and minerals, including iron, magnesium, and potassium. Quinoa is also a good source of antioxidants and has anti-inflammatory properties. All of these factors make quinoan ideal food for people who are looking for a nutritious and healthful option.

The Nutritional Facts of Quinoa

Quinoa is often touted as a “superfood” or a “miracle grain.” But is it really as healthy as people claim? Let’s take a closer look at the nutritional facts of quinoa to find out.

As you can see, quinoa is an excellent source of several essential nutrients. It’s also a good source of heart-healthy unsaturated fats and antioxidant phytonutrients. Quinoa is gluten-free and hypoallergenic, making it a good choice for people with celiac disease or gluten sensitivity.

The Health Benefits of Quinoa

Quinoa is a grain that has been praised for its health benefits for many years. It is a complete protein, meaning that it contains all nine essential amino acids, and is also high in fiber and minerals. But is quinoa really as healthy as people say?

There are many different opinions on this subject, but the general consensus seems to be that yes, quinoa is indeed a healthy food. One of the main reasons for this is because of its nutrient density. Quinoa is not only a complete protein, but it is also high in fiber, magnesium, phosphorus, iron, and potassium. It also contains all eight essential amino acids, making it a perfect food for vegetarians and vegans.

Related Articles >  Is Watermelon Really as Healthy as Everyone Says?

Another reason why quinoa is considered to be healthy is because it is a gluten-free grain. This makes it a great alternative for those who are unable to eat wheat or other grains that contain gluten. Quinoa is also a good source of antioxidants and has anti-inflammatory properties.

So, there you have it! Quinoa is definitely a healthy grain that can be enjoyed by everyone. Whether you are looking for a complete protein or just want to add more vitamins and minerals to your diet, quinoa is a great option.

The Side Effects of Quinoa

Quinoa is considered a whole grain, but it is actually a seed. It is a good source of fiber and protein, and it is gluten-free. Quinoa is a healthy food that has many potential side effects.

The most common side effect of quinoa is digestive upset. It can cause bloating, gas, and diarrhea. Quinoa contains saponins, which are plant compounds that can have a soapy taste. Saponins can also be irritants to the digestive tract. Some people are allergic to quinoa. Symptoms of an allergy include hives, swelling, itching, and difficulty breathing. If you are allergic to quinoa, you should avoid it.

Quinoa may also interfere with blood sugar control in people with diabetes. Quinoa has a high glycemic index, which means it can cause your blood sugar to spike. If you have diabetes, you should eat quinoa in moderation or avoid it altogether.

If you have celiac disease or are sensitive to gluten, you should avoid quinoa because it may contain gluten. Quinoa is often grown in fields that also grow wheat or barley. There is a risk of cross-contamination if the grains are not properly cleaned before packaging.

Quinoa is a healthy food that has many potential side effects. The most common side effect is digestive upset. Some people are also allergic to quinoa or sensitive to gluten. If you have diabetes, you should eat quinois in moderation because it has a high glycemic index

Quinoa is a very healthy food. It is high in fiber and protein, and it contains all the essential amino acids that our bodies need.

Quinoa is also a good source of magnesium, manganese, phosphorus, copper, iron, potassium, zinc and vitamins B1, B2 and B6. All of these nutrients are important for maintaining our health.

Quinoa is a gluten-free food, which makes it a good choice for people with celiac disease or gluten intolerance. Quinoa is also a low-glycemic food, which means that it won’t cause spikes in blood sugar levels.